A supergroup of GIJN founders, veteran reporters and educators brought their experience to the table at the academic track’s last panel at #GIJC17, Teaching Investigative Journalism: Best Practices. All speakers had experience as reporters as well as educators and helped found investigative centers, newsrooms and groups in the U.S., Hong Kong, South Africa and Tunisia.

“Traditionally, journalism schools don’t want investigative journalism because they think it’s the cherry on the cake,” Hunter said. “For me, it is the cake.”

Besides reluctance of the schools, there is a shortage of experts with field experience who can teach investigative reporting. Experienced journalists, on the other hand, are not always the best teachers.

“Students are not interested in theory, they want to know how to do this work,” Hunter said. “But most investigative journalism practitioners are not experienced teachers.”

A purely project-based class is not enough, according to Hunter. It is important that students know the history of the profession as well. Notable reporters know how investigations happened in the past. 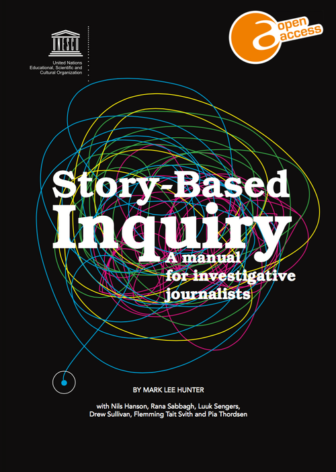 Training is based on Hunter’s book Story-Based Inquiry, which is available for free online. Class assignments include finding local journalism idols and doing research on open sources to add to the database.

He said it is important to consider is risk management, and to teach students how to be safe.

“Students are always excited to go undercover,” Hunter said. “Going undercover, amongst other things, can get you killed.”

To make tenure-track professors more confident and knowledgeable about teaching investigative journalism, they offered them a platform to do their own investigations.

“ARIJ is an organization that sponsors investigations and coaches people,” Hunter said. “We can offer professors that training so when they walk into the college, they will at least have a knowledge of the business.”

Together with Deutsche Welle, the program coordinators applied their model to Mongolia and set up a program there. And the United Nations Development Program contacted Hunter to set up a program in Tunisia to train professors teach students to pursue corruption cases.

“That was a stretch for me but we did manage to get the curriculum done,” he said. “We finally established a stable investigative journalism curriculum there.”

As a veteran reporter, founding director and current professor of the Journalism and Media Studies Center at the University of Hong Kong, Ying Chan knows investigative journalism education from many angles.

The center works as a mini-school with full undergraduate and master programs.

“We are a small school with very limited resources and very high security concerns,” Chan said. “The control of media is draconian in China but even in Hong Kong the security forces will call you and worse, they can visit your friends and family in mainland China.”

“It takes a village to raise a child and a journalist, it takes a world to raise an investigative journalist!”      — Ying Chan

The security concerns are also one of the reasons they do not advertise the school as an investigative program. As there is a lack of local recognition and sponsors, the center has little resources.

“We are very discreet,” Chan said. “There is also no foundation money in Hong Kong.”

Chan solved this problem through partnerships.

Students are sent on internships to local and regional outlets such as the Nepali Times, where students worked during the coldest winter in Nepal due to the Indian oil embargo.

“They went to the border were there had been an earthquake with a local reporter,” she said. “The story turned into a double-page spread in the newspaper.”

Other partners are the Irrawaddy and the Democratic Voice of Burma.

Chan also partners with international reporting programs. The GroundTruth project is one of them.

“The GroundTruth Project continues to look for local partners,” she said. “My students also work together with students from the University of British Columbia.”

One of the founders of GIJN, Brant Houston, is the Knight Chair in Investigative Reporting at the University of Illinois where he teaches investigative and data journalism. Houston has initiated multiple student-oriented investigative projects. One of them is the Investigative Journalism Education Consortium.

“I wanted to set up a place where people who teach investigative journalism can share syllabi, student stories and research,” Houston said. “I am always learning from everybody else and am collecting these syllabi.”

When teaching investigative journalism, Houston uses Investigative Reporters and Editors resources and encourages his students to join IRE, as well as use the more globally-oriented resources on the GIJN site.

“The resources and tip sheets on this website should be part of the curriculum,” he said. “If you are doing investigative reporting, it has to be practical and recognize what is going on in the world and locally.”

Two other projects Houston started are called CU-CitizenAcces and the Midwest Center for Investigative Reporting.

“Students need to have an audience for their stories and when I got to the University of Illinois there were not really many platforms,” he said. “They publish their investigative stories on CU-CitizenAcces and through Investigate Midwest they can work on local stories that can go global.”

On both platforms, the students and journalists share data and create databases, which readers spend a lot of time with.

At a university, time is very limited and investigative reporting is often long term.

“I remind students of how many hours they have left in the semester,” Houston said. “When it comes to ethics, we cover that as we work on the stories.”

The first two weeks of Houston’s investigative reporting class are spent on research. He wants students to learn how to find a story. But in case they do not find a topic they care about, Houston has a list of stories ready.

“I tend to go with local stories, so they can interview in person,” he said. “In my experience, students do not like to do face-to-face interviews, so I want them to have to go and meet somebody.”

In Houston’s class, students are taught about different kinds of sources such as officials and advocates, making a contract with the interviewee about what off-the-record and on-the-record means and to go outside and look at buildings and stories.

Jelter Meers is a Belgian investigative reporter who works for the Investigative Journalism Education Consortium based at the University of Illinois. He helped coordinate the academic track at #GIJC17 and has worked on topics ranging from the agrichemical business to human trafficking.