In this four-part series, IJEC provides an overview of the presentations and tip sheets available online from the conference, which was attended by 440 journalists from 48 countries. 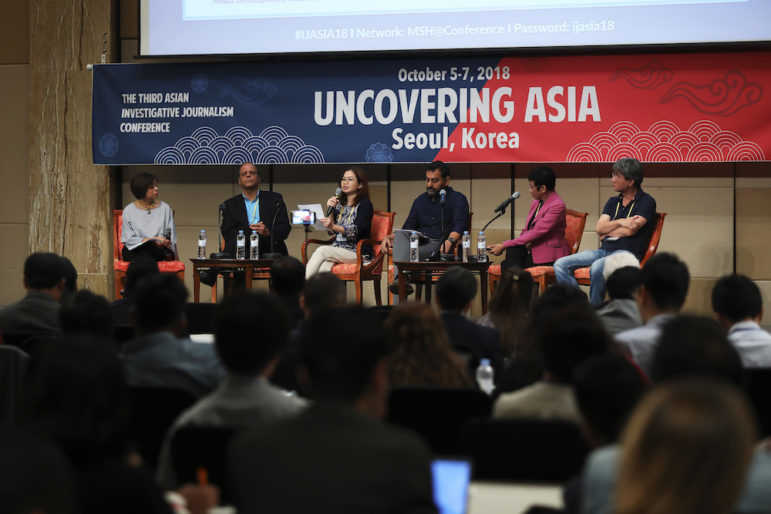 During this year’s edition of Uncovering Asia: The 3rd Asian Investigative Journalism Conference, experts from across the globe explained how to investigate criminals and expose the money trails they leave behind. They taught the audience how to track smuggling ships, uncover money laundering networks, cover human trafficking and disclose organized crime networks.

By explaining how customs and container codes work and giving a tutorial on how to use trade and maritime databases, Columbia University’s Giannina Segnini gave journalists everything they need to track shipments, cargo, ships and crew.

Corporate Crime and following the money

A reporter at the Kantipur National Daily, Krishna Acharya knows how to investigate dirty money in Nepal. She discussed the major actors in dirty money schemes and highlighted four big investigations.

Corporate crime is one of those topics in investigative journalism that has gained traction over the past decade with major transnational leak projects such as the Panama Papers.

Miranda Patrucic of the Organized Crime and Corruption Reporting Project gave a tutorial on how she investigates corporate crime. She listed various sources reporters need to get started and highlighted OCCRP’s open database Aleph.

In Following the Money, Connecting the Dots, Ritu Sarin, Investigations Editor at the Indian Express, discussed various offshore and tax evasion stories that might give journalists good ideas for stories.

Watchdog Asia’s Wahyu Dhyatmika explained how to follow money across borders and illustrated how reporters can get the most out of ICIJ’s Offshore Leaks database.

Dhyatmika discussed every step of the way in Cross-Border Investigations: Following the Money.

Dhyatmika also gave a presentation on Exposing Modern Slavery in Asia, discussing the lack of media coverage and how to report on data that shows the true scope of this major humanitarian issue.

Pramod Acharya, a Nepal journalist who is getting a graduate degree at the University of Illinois, gave a presentation called Nepal-India-Gulf Human Trafficking Nexus, with tips on covering human trafficking applicable worldwide.

There were two more presentations on human trafficking at Uncovering Asia 2018:

How The Reporter and Tempo collaborated to investigate on human trafficking, by Sherry Hsueh-Li Lee

In Strategies to Track Criminal Networks, Alia Allana of Fountain Ink magazine gave all her tips on connecting the dots to uncover criminal networks. She suggests using every kind of resource, from online data to old maps, field reporting and social media.

Associated Press reporter Martha Mendoza discussed how she uncovered the No Gun RI Massacre that happened during the Korean War.

GIJN also provided additional coverage of the presentations and talks on investigating crime:

This is Not Just a Story Anymore: When Journalists Break the Objectivity Rule