The sold-out conference had more than 60 sessions and more than 400 investigative and data journalists attended from 48 countries.

The talks ranged across many topics and the conference included a track of sessions of hands-on data journalism training. 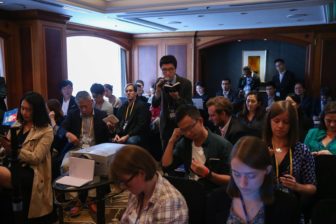 “It’s so great to see so many Asian muckrakers in one room,” Sheila Coronel, academic dean of the Graduate School of Journalism at Columbia University, told the crowd at the Millennium Seoul Hilton. “It’s an exciting time to be an investigative journalist, but it’s also a very fraught time.”

In this four-part series, IJEC provides an overview of the material of the conference available online.

The first part will focus on doing investigative reporting in Asia; the second delves into data and documents for investigations; the third part explains how to investigate crimes; and the fourth covers the panels on new technologies as well as multimedia and environmental reporting.

Tracking business and money in China

The tipsheet on Tracking Chinese business by the New York Times’ Maria Abi-Habib discusses what she learned as an investigative journalist reporting on China.

Abi-Habib said to start by reading everything you can on the topic of your investigation, in her case Sri Lanka’s Hambantota Port, a $1 billion construction project that was handed over to the Chinese government and considered an economic disaster for Sri Lanka.

Secondly, immediately build out your network of connections, don’t skimp on junior level contacts and target middle men and women.

“In my experience, going to the top officials can be futile,” the tipsheet said “They are often appointed as a political favor, so know little about the ministries they’ve inherited or they’re too politically ambitious to open up. Mid-level officials are the ones that know where the bodies are hidden. They understand the details of the subject and provide longevity, as they survive various administrations.”

In their overview of sources to get corporate records in Asia (and elsewhere), Patrick Boehler and his colleagues include company registers, commerce ministries, state councils, stock exchanges and much more from the Philippines to India and Hong Kong.

Boehler also made the slides for his presentation available: Tracking Chinese investments and influence in Europe.

Two more presentations on tracking Chinese business and money from the conference are available online:

How The Guardian investigates on Chinese money, by Lily Kuo

Martin Weiser’s Five Stories in North Korean Materials lists different kinds of sources for covering North Korea. While leadership texts are often state propaganda — and contain interesting contradictions — institutions such as satellite parties or religious organizations are more independent from the state and its propaganda.

GIJN also provided coverage stories for many of the sessions. Here is a list of stories on the sessions that discussed investigative reporting in Asia

5 Tips on How to Investigate North Korea

How to Track Chinese Businesses in Africa, Europe and Southeast Asia: Tips and Tools from Top Investigative Reporters