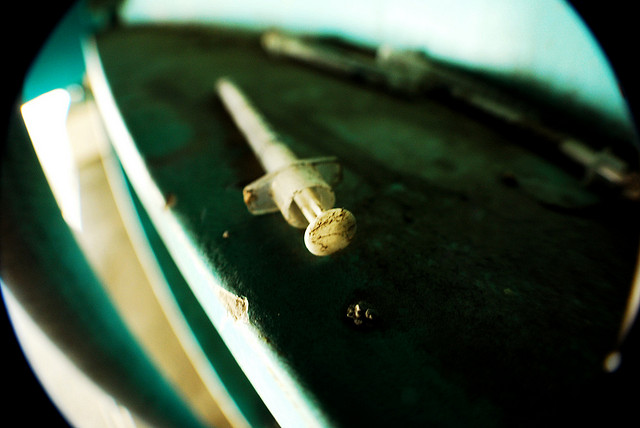 Flickr user bradadozier, who writes he found it "at ... a skate spot under a highway in cincinnati" https://flic.kr/p/67VNSL

Indiana’s meth problem, which hit in the 1990s and stuck ever since, made sense for the state: all you needed were a few fairly innocuous ingredients and a place to cook, and you had a bona fide meth lab.

The latest drug to take hold of the state doesn’t make as much sense, though. Heroin, the highly-addictive drug derived from the opium plant, has worked its way across Indiana, even into some of its most rural regions. But unlike meth, home-grown heroin doesn’t exist in the state.

So where is it coming from? The answer depends whom you ask.

But others in a position to know aren’t so definitive.

“Any connection to Mexican drug cartels or other major suppliers is unclear at this point,” said Sgt. Curt Durnil, a public information officer for the Indiana State Police.

Sgt. Noel Houze, public information officer for the Indiana State Police in the 42nd District, offered a much different possibility. “It’s probably coming from Afghanistan,” Houze said, “but how is it getting into here? Does it come through Mexico, does it come through Canada, who knows?”

According to a recent study released by the Special Inspector General for Afghanistan Reconstruction, in fact, opium production in the country jumped 36 percent between 2012 and 2013, with more than 500,000 acres of land devoted to growing opium.

Afghans have taken to using more opium themselves in that same time frame, but they still account for three-quarters of the rest of the world’s opium product. But Wichern takes issue with the notion that the Middle East could be supplying the Midwest.

“Sometimes you hear people saying, ‘Afghanistan heroin’ and things like that,” he said. “Very little of that gets here. Most of that opium that’s grown in Afghanistan and that’s converted to heroin in Turkey stays in Europe.”

Ultimately, the international origin of Indiana’s heroin supply is less important than the regional pipeline. Wichern has one word for that as well: Chicago.

“Chicago, with its population base, with its trains, its airplanes and its highway system, is the number one source city, or the distribution point, in all of America for heroin right now,” he said.

Heroin enters town in hidden compartments on various vehicles, according to Wichern, and then, from the middle of America, it disperses. In Indiana, I-74 is the Heroin Highway, heading straight into Indy from the Windy City. Some flows further down 74 into Cincinnati, which supplies some of Indiana’s eastern counties.

The trickle-down drug problem in Indiana is well-established. Many counties cite Indy as the probable cause of their heroin epidemic. And, in turn, Indy, as well as much of the U.S., gets its heroin from Chicago.