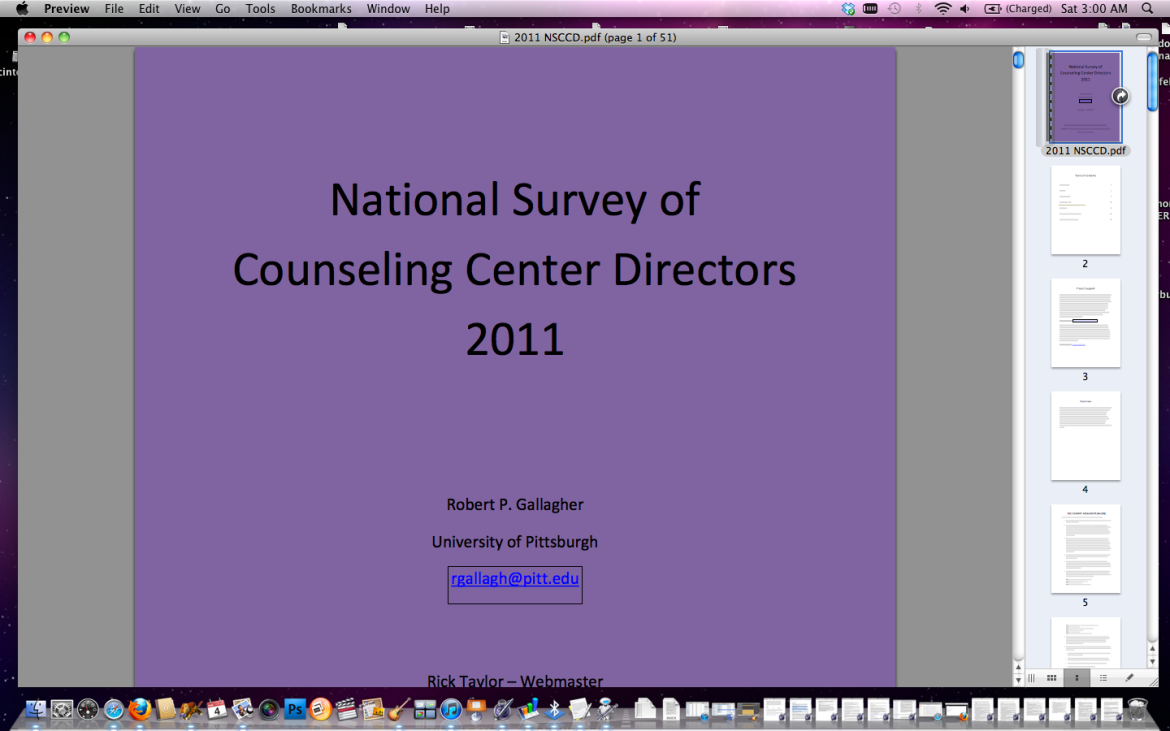 With mental health needs rising on college campuses across America, some of Indiana’s public universities are struggling to deal with student demands for counseling services, a three-month review of the state’s institutions of higher learning has found.

Complicating the picture is the fact that there is no easy means of assessing the performance of individual universities or the university system as a whole on student mental health. There is no statewide requirement for standardized reporting or accreditation, and some universities have been unwilling or unable to provide information that would shed light on the state of mental health counseling at their campuses.

The review was conducted by a graduate-level reporting class at Ball State University working as part of a six-state university investigative reporting consortium sponsored by the McCormick Foundation.

“But the downside of that is sometimes there are people waiting who if you could get to them sooner you could prevent them from deteriorating or going into an emotional tailspin if you could see them quickly and comprehensively.”

Highlights of the reporting in Indiana include:

Such findings are troublesome in light of events that have called attention to the problems of mental illness on campuses, such as the 2007 tragedy at Virginia Tech in which a student diagnosed with a severe anxiety disorder shot and killed 33 people, including himself. Academic researchers have been raising concern about apparent increases in the number and severity of student mental illness cases – and the ability of campus counseling services to handle them – for a number of years.

“That is true,” said Andrew Klatte, assistant deputy director of the Indiana Division of Mental Health and Addiction. “That’s also true across the country. There is still a stigma regarding mental health. Mental health has to become a priority with the legislature and within communities.”

Beginning in September, student reporters at Ball State submitted requests for records from counseling centers at all 15 of the campuses. Though not all centers complied with the requests, the interviews and records that were obtained provide a picture of mental health services stretched thin at a number of large public universities.

Julie Lash, director of Counseling and Psychological Services at IUPUI, said in an interview in mid-November that she’s had to start a waiting list for student counseling appointments, taking the most severe cases first.

“We triage, actually,” she said. “We get folks in and we do an initial assessment. And then depending on how severe their impairments are will depend how long they’re going to wait. Some people have had to wait over half of a semester in order to get in. We just went to the wait list about two weeks ago. Right now we’re at close to 30 people on the list. They won’t all get in before the end of the semester.”

Lash said students bring a variety of problems into the counseling center, and though she hasn’t necessarily seen an increase in numbers of students, more students have more serious issues than before.

“Most (students) have either depression or anxiety of some sort,” Lash said. “But it really kind of falls (in) the whole range from ‘I get nervous when I have to give a talk in class,’ up to some people who have very significant impairments, can’t get out of their house, can’t drive, whatever, because of their anxiety. Same thing for depression.”

This year, to serve a campus with 30,566 students, Lash has five full-time clinical staff members. Rounding out her staff are two post-doctoral fellows, one part-time licensed provider, two pre-doctoral interns and six practicum students. Those resources are tenuous, though, because of ever-present budget issues.

“State funding has been cut the last few years,” Lash said. “We’ve had to plan for budget cuts the last two budget cycles…. We are part of general services fees and we have to fight for what’s there every year.”

The IUPUI counseling center applied for IACS accreditation about eight years ago but didn’t receive it because of the shortage of counselors.

“At that time we had three counselors,” Lash said. “We weren’t even close” to the IACS guideline.

She said the center would have “a good chance” of getting accredited if it could fund 10 to 12 counselors, but she doesn’t foresee that happening any time soon.

Kenneth Chew, director of the counseling center at Indiana State, knows all about such budgetary challenges. The ISU center peaked in terms of staffing in 2006 with six full-time counselors. But the next year, it was asked to eliminate two positions. The center now has three full-time counselors to serve a student population of 11,494.

The university spends about $225,000 on the center’s full-time staff, but typically pays another $120,000 annually for part-time help. Chew said the staff is “extremely overextended.”

Making things worse this year, he said: “We have been swamped this semester and we currently don’t have an office manager.”

At the University of Southern Indiana in Evansville, B. Thomas Longwell is the newly-appointed director of counseling services. Including Longwell, the school’s counseling center has three full-time counselors for a student body of 10,702.

That’s a ratio of one counselor to 3,567 students, more than twice the level recommended by the IACS.

Longwell would like to have more staff to meet increasing student needs, but lacking the budget for that, USI – like IUPUI – uses a triage approach.

Students with emergencies or potentially life-threatening crises are helped immediately, he said. For most students, who suffer from common forms of depression, the center tries to meet their needs in six or seven sessions over the course of a month and a half.

Insufficient staffing at USI has been a concern since at least the 2007-2008 academic year, the last time the center produced an annual report. That report noted a growing demand for services and recommended “a limit of 5 counseling sessions per student.”

It also reported an eight percent increase in the number of face-to-face contacts with students, faculty and staff.

IU-Southeast in New Albany has a counselor-student ratio similar to that at USI – one full-time counselor for the campus’s 3,365 students.

That one counselor is Michael Day, director of personal counseling services. He handles the majority of individual appointments, using five part-time doctoral students to help with the caseload. Each graduate student works about 10 hours a week.

The workload is steadily increasing at Day’s center.

“I don’t think we are equipped very well,” Day said. “We don’t really have after-hours services. I am on call, but we have no walk-in hours. We don’t have enough staff to have walk-in hours.”

Things used to be worse, however. Four years ago, Day said, the campus had only one part-time social worker.

“Staff has grown,” he said, “but it is still not quite big enough.”

Not all counseling center directors in Indiana are concerned about staffing, however.

That gives Ball State a counselor-student ratio of one to 1,577.

That is close to the IACS-recommended ratio, though Payne’s figure includes three doctoral interns and an assistant director in training.

According to Jones, the former president of IACS, those positions do not count toward meeting the guideline.

With a student population of 42,464, IU’s counselor-to-student ratio is 2,440, but Stockton doesn’t see a problem with the numbers.

“I think the university has been cooperative in terms of trying to add positions, and have indeed funded three new positions over the last three years,” she said. “It’s still not enough, but I think it’s more than adequate.”

Even so, IU’s counseling center doesn’t meet the IACS recommended staffing levels, a problem Stockton noted in a letter last July to Mary Chandler Bolin, chair of the association’s board of accreditation.

Stockton cited “budgetary and economic restraints” as well as constraints on office space as continuing issues.

IU is among a few Indiana universities that charge students for some counseling services.

Students opting out of the health fee pay $50 per session. Sessions conducted by a licensed psychiatrist are considerably more expensive, with initial sessions ranging from $40 for fee-paying students and $100 for others.

Another school that requires some student payments for mental health services is ISU, where students receive one free appointment followed by a one-time fee of $60 for the academic year.

According to counseling director Chew, however, charging students does not always equal more resources for the center.

“That money does not come back to our operational budget,” he said in an e-mail. Rather, the fees are returned to the university to cover auxiliary staff already in place.

One way counseling centers supplement their limited budgets is by seeking grants.

Vincennes University, for example, received three grants from the Indiana Campus Sexual Assault Prevention Project from 2007 to 2009, totaling $9,000, including a $5,000 grant in 2009 that identified Vincennes as the model institution for the entire state.

However, in 2010, as strains on counseling staff intensified, Vincennes was forced to discontinue the pursuit of all grants and preventative projects to prioritize increased student mental health needs, according to VU’s annual counseling center reports.

Lisa Bishop, director of counseling services at Vincennes, initially agreed to an interview for this story but then cancelled, ignoring follow-up requests.

Such lack of cooperation from some health center directors around the state, coupled with the lack of any mandated reporting standards, created challenges in making meaningful comparisons among the various universities.

Though some university counseling centers consistently issue annual reports, there is no requirement that they do so, and no standardization among reports either.

The Indiana Commission on Higher Education coordinates planning and budgeting for universities in the state, but according to ICHE’s Rosemary Price, the agency does not have information or regulations regarding mental health on campuses.

Likewise, the Indiana Division of Mental Health has no oversight of university counseling centers, according to Klatte.

Consequently, each university follows its own procedures, making it difficult to assess budgets and staffing levels from campus to campus.

Some counseling centers could provide only rough estimates of numbers, and others provided no information at all.

At ISU, for instance, Chew outlined approximate figures for his department’s financial standing based on previous budgets, but he could not give precise numbers.

Three months after making the initial requests for records and information, some universities have yet to comply.

Under Indiana’s Access to Public Records Act, universities and their counseling centers are public agencies required to release records not deemed confidential, including budgetary and other documents.

But compliance with the requirements of the act was spotty.

Student reporters encountered varying degrees of resistance to requests for records, from officials who ignored calls and emails to others who outright denied requests.

Numerous phone calls and emails to officials at Purdue and Purdue-Calumet, for example, were met with little response.

At Vincennes, Bishop responded to a verbal request for documents first by indicating that no such records existed, adding, “I’m not at all inclined to provide you with any of that information even if it existed.”

After a follow-up email cited the access law, Bishop responded with copies of the counseling center’s one-page annual reports.

In spite of these issues, the increasing need for mental health services on campuses is clear from the data that is available.

For individual students requiring services, the numbers are irrelevant. Rather, they just want someone to be there when they need help.

“It’s treatable,” said Krystel Brattain, a Ball State senior who has struggled with depression. “You don’t have to suffer. I think the counseling center really helps. Counseling in general really helps.”